Never underestimate the bond between a guardian and their pet. A union so strong it would take a multitude to break it, or maybe just a treat or two. Animals really love their keepers. The feelings are usually mutual if you’re ready for an animal friend. However, there’s more to cultivating these relationships than meet the eye. Have an affinity for animals? Then you’ll want to put Downtown LA’s newest neighborhood addition The Animal Museum on your bucket list. They’re stationed in the burgeoning Arts District – shedding a compassionate light on animals while providing the proper tools needed to carry out these values overtime.

Not going to lie – when I heard about The Animal Museum. First thought to cross my mind was a gallery full of taxidermy. I was completely wrong (of course). There were no stuffed animals on the premises. In fact, The Animal Museum had nothing to do with taxidermy, but everything to do with exploring the bond between humans and animals while focusing on animal protection and rights. We share the planet with these fascinating creatures, we might as well do our best to serve, honor and protect them.

“We’re the first museum of our kind to focus on animal protection and the human-animal relationship, and honored to be in Downtown LA.”

Founded in 2010, The Animal Museum is the first and only establishment dedicated to exploring the bond between humans and animals. Part of their vision is, “like you, we want a kinder, more compassionate world that celebrates animals as sentient beings who are deserving of our attention, understanding, and respect.” The museum focuses on portraying these human-animal bonds by offering exhibitions and educational programs that are informative, inspiring, engaging, and interactive. Encouraging visitors to be proactive while giving animals a voice.

Past exhibits include, “Entangled” – a showcase that encouraged visitors to “sea” the impact our world has on marine animals and how to take action. On February 25th, The Animal Museum had their grand opening for “The Sexual Politics of Meat” (aka SPOM). SPOM explores the ways women and animals are objectified and marginalized in patriarchal cultures by depicting how someone might literally and metaphorically become “pieces of meat.” Changing the perspective of being called a “piece of meat”and taking it to the next level. This exhibit runs until April 30, 2017.

The Animal Museum will be kick starting a robust year full of events. Perfect for any daytime adventure or educational field trip. Stay tuned for upcoming lectures, film screenings, animal adoptions and more. They’re also super duper dog friendly! Next time you’re in the area, swing by for a visit and feel free to bring your pup! For more information on The Animal Museum please visit their website or follow them on Instagram. Want to support The Animal Museum? Then go here.

All Images Taken By Jovanni Cortez Unless Stated Otherwise 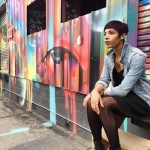